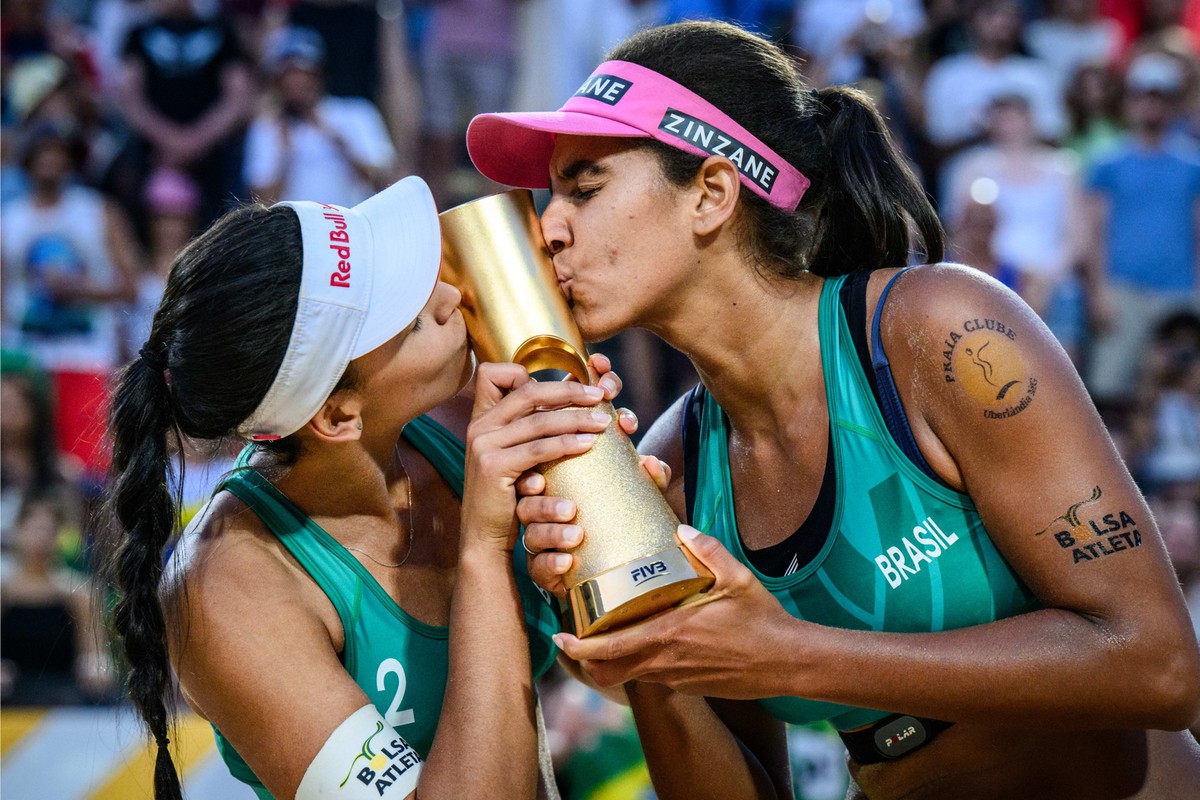 An unsuspecting person who turned on the tv on sportv and stopped to watch the match between Duda/Ana Patrícia and Canadian duo Bukovec/Brandie couldn’t imagine it was a World Cup final beach volleyball in the first set. With a very high technical level, the Brazilians made the first half an ordinary game. With a certain ease, they closed at 21 to 17. In the second, it took a little more nerves of steel, but again the national duo put on a show, securing victory with two sets to zero, partial du 21/17 and 21/19, and became world champion in Rome.

Duda and Ana Patrícia have achieved the feat of being champions at the base and now also in adults. Both were two-time World Under-21 Champions and also won the Youth Olympics. Duda also has two Under-19 world titles on his CV.

Brazil returns to the top step of the world podium after seven years. In 2015, Ágatha and Bárbara were world champions in the Netherlands. A year later, they won the silver medal at the Rio de Janeiro Olympics.

+ Find out how the point-to-point finals went

Brazil had the chance to achieve a golden double in Rome. But Vitor Felipe and Renato failed to surprise current Olympic champions Mol and Sorum (NOR) and took second place in the competition. The Norwegians won by two sets to nil, partial on 21/15 and 21/16.

Earlier, André and George had already secured the Brazilian double on the men’s podium. In a comeback, they defeated American duo Schalk/Brunner by two sets to one, partials 15/21, 21/17, 15/11 and secured the bronze medal.

Devastating, Brazil began to impose their game from the start. Duda defended well and attacked to open 3-1. Duda herself went to serve and with an ace made it 6-2. Technically very well, the Brazilians didn’t breathe life into the Canadians. Ana Patrícia closed the door to Bukovec and ensured a five-point gap on the scoreboard (12-7). The rivals improved on the court, tried to tighten up, but without much success. Quietly, Duda closed the first set at 21-17.

The Canadians came back better for the second set, especially in the turn of the ball. Unfortunately for them, the Brazilian duo was also very firm and the game became more equal. Ana Patrícia blocked Bukovec and gave Brazil a small advantage (6-4). Unable to break the Brazilian game, the Canadians began to push harder. Bukovec attacked twice (14-10), but went for serve in Brazil’s errors (14-14). In one of the Canadian points, Ana Patrícia was very angry with the referee, who gave a rival point in a ball dispute in the net. The Brazilian team got a little nervous and took the turn at 17 against 16. But all it took was a request for time, a breath, and everything was back to normal. With great confidence, the Brazilians turned the tide and Ana Patrícia exploited the block to close the partial in 21 to 19 and be world champion.

Vitor Felipe opened the game making two great saves and attacking. But Mol made a cross serve that caught the end of the line and leveled it at 4 against 4. Pressed on serve, the Brazilian duo gave the rivals some points. Renato attacked on the outside and Norway opened 9-6. The Europeans followed better on serve and block and the Brazilian duo couldn’t react. On the counter-attack, Sorum put his team six ahead (17-11). And it was Sorum himself who slashed behind the block and closed the first set at 21-15.

Calm, the Olympic champions came back in the second set and quickly opened 4-1. Brazil managed to even the game and started to exchange points with the Europeans. But it was difficult to break the rival game. Mol stops Renato in the block, increases the Norwegian advantage (10 to 6) and puts even more pressure on Brazil, which gives two points to the opponent (12 to 6). Vitor Felipe and Renato didn’t give up, they kept looking and were able to reduce to 19-16. But, with the title in hand, the Norwegians managed to close at 21-16 with Mol blocking Vitor Felipe.