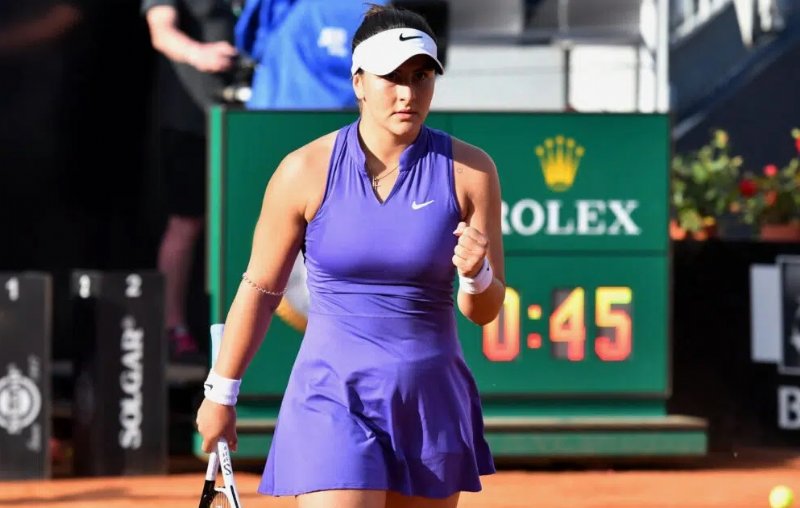 Rome, Italy) – Like that it had already happened last week in Madrid, Emma Raducanu again suffered from pain in her lower back, but this time she couldn’t even finish her match. The Briton abandoned the match against the Canadian Bianca Andreescu when she was trailing by 6/2 and 2/1 after 1:05 of the match.

Andreescu led the winners statistic 25-9 and committed just five unforced errors to his rival’s five. The Canadian didn’t face any break points in the match and created 11 break points, taking advantage of three of those chances, two in the first set and one in the second.

Former world number 4, Andreescu is only playing his third tournament of the season and is currently in 90th place in the rankings at 21 years old. Recently, the Canadian reached the round of 16 in Stuttgart and Madrid. Before that, he hadn’t played since October last year.

“I went into the game with a very positive mindset and I knew it wouldn’t be an easy game. Whatever she’s going through, I hope she recovers quickly. But I was really happy with how consistent I was with my performance,” Andreescu said after the game.

“Even when she asked for medical leave, I didn’t get distracted,” commented the Canadian. “Obviously I didn’t know she was going to retire from the game. But I wish her a speedy recovery and hope I can keep the same energy in the next rounds.”

Raducanu, the current US Open champion, sits 12th in the standings. The 19-year-old Briton is one position below her career best and came from fourth at Stuttgart and eighth at Madrid.

“Yes, I am disappointed with what happened today. But I think I wanted to try. when this is not the case. I learn in these tournaments. The difference is that I probably do it in bigger tournaments,” said the Briton.

Andreescu’s next opponent in the Italian capital will be 51st-ranked Spaniard Nuria Parrizas Diaz, who was losing to compatriot Sara Sorribes 6/1 and 4/3 when her rival retired due to injury. in the back.

Pegula also advances, Ostapenko falls at the start
Finalist of the WTA 1000 in Madrid and number 11 in the ranking, the American Jessica Pegula beat Liudmila Samsonova by 4/6, 6/3 and 6/4. Pegula now faces Ukrainian Anhelina Kalinina, who beat American Madison Keys by a 6/4 brace.

Latvian Jelena Ostapenko, 13th in the standings, was eliminated in the first round by American Lauren Davis, who scored 6/2 and 6/3. Davis faces in the second round the Kazakh Elena Rybakina, who beat Elina Avanesyan by 6/4 and 7/6 (7-0).